A Summer in Review

What a summer.  I mean really.  It started with the break-up in May.  June was filled with lots and lots of work and one kick-ass gay pride celebration.  Pride weekend was sort of like my official re-entrance into the social world.  I was able to hang out with lots of friends, reconnecting to many people who I just lost contact with along the way.  Saturday night of Pride weekend I had a spontaneous cocktail party.  It was so much fun.  I just played bartender and enjoyed having my apartment full of drunk flight attendants.  (not unlike many layovers throughout the years…) 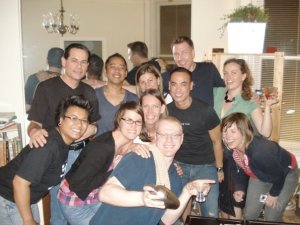 In July I decided to take a vacation by myself.  I haven’t been on many true “vacations.”  And this needed to be a true getaway for me.  After basically working myself into the ground in June, I needed to take it easy.  So… New York.  I’ve been to New York a bunch of times, but I’ve never gone by myself.  I liked the sound of it. It seemed like the right thing to do as a single guy.  I didn’t want to go to a place that I knew lots of people, because the trip would be about seeing everyone.  I wanted to completely operate on my own whims and schedule.  And I did!  I found a great little Midtown hotel online called the Pod Hotel.  I flew out for free on Virgin America. (my airline has a reciprocal agreement with them) The trip was absolutely perfect.  I geeked-out at several museums.  I went to one very powerfully emotional musical.  I roamed Manhattan.  I had lots of sex.  Like I said, the trip was perfect.  I even started to joke about the trip by calling it my sex-cation.  😉

On that note, I have to admit that I was actually surprised by how uptight New Yorkers were about sex.  Maybe it has something to do with living in a city that embraces sexuality in so many ways.  I thought I would take a very direct approach, this was NYC after all.  They invented the art of getting to the point.  However, it seemed to scare off a lot of guys.  The internet has created a very sterile approach to sexuality.  People try to weed out every guy that isn’t perfect in every way.  But, perfection doesn’t truly exist.  So, most guys just play around online.  They chat.  They cam.  They spend a lot of time alone with their hand.  Maybe I should write a whole post just about these issues.  I’m a-gonna.  For now, I’ll move one.  Regardless, here’s a couple pictures from New York.

at MoMA, in the "mark your height" room.

on Broadway! I was just trying to give a "Broadway" pose. I just look crazed. It was fun trying to get this shot...

having a drink with old friends and meeting new ones

In August I went home to Iowa to visit my family.  Since I haven’t been home since February of 2008, and I am trying to get back to Iowa more often, this trip was essential.  I went for seven whole days and had an incredible time.  My friend Phoenix joined me for a few of those days.  We spent the weekend in Des Moines at the Iowa State Fair and went to Des Moines’ gay bars.  The gay bars were disappointing, but the Iowa State Fair absolutely lived up to it’s reputation.  I’m not just biased, having grown up on the ISF.  It really is truly amazing.  Great food.  Great entertainment.  Great eye candy, which is why Phoenix joined me. 😉  If you are a size queen, it’s one of the country’s largest fairs.  Just Google it to see why everyone needs to visit it before they die.

Also, while I was in Iowa, my grandmother had her 88th birthday party.  But the real surprise for me was the night I spent at the 2009 Sprint Car Nationals.  Um, yeah, you heard me correctly.  It went against everything that I believe in, and I had an truly incredible time.  Sometimes you just have to say, “Fuck it. I’m gonna relax and have fun.”  It was awesome.  I’m not sure I’ll ever go again, but I’m glad I went this time.  Overall the trip was great.  I spent a lot of time with my grandma, and I finally met my youngest nephew Cash. 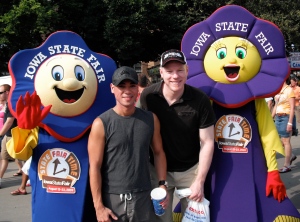 Phoenix and I, posing with the Iowa State Fair Ribbons.

Here I am posing with a sprint car. Don't you think I fit right in?

That just about sums up my summer.  Be sure to check out all my photos on flickr.  So far, I just have the NY ones loaded.  The Iowa ones will be up soon.

This entry was posted in Uncategorized. Bookmark the permalink.